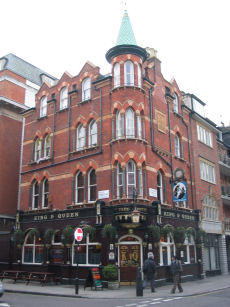 There are many pubs in Fitzrovia, just North of Oxford Street in Central London, W1 and most have some claim to fame, but the King & Queen, on Foley Street, in the shadow of the Post Office Tower, is a personal favourite for a number of reasons - although chiefly, as with most decent boozers - because of the staff.  It's what we would call a ‘proper’ pub. It's part of a small chain now, I think. According to the website, it's been owned by the family run LEA Taverns since 1985, and a jolly good job they've done too. Like most of the city centre pubs, I've not been there often for last orders and it has TVs and a juke box. But importantly for places to find inspiration, the vibe is good. And the staff are smart in that old-fashioned, no-nonsense way. The second time I went in there, on a fairly busy Friday night, I did single myself out by asking to take a pic of their classic old till, but then I perched on a seat at the end of the bar with a pint of what I call ‘cooking’ lager. Lower alcohol. Carlsberg, in this case. Just as I'd finished it, one of the barmen, faced with a busy onslaught of other customers, noticed I'd finished and nodded to me. “Same again?” Classy.

It's a reasonable place to write in as well. Prices are not too bad. Wifi is good. They do food at lunchtimes, although I've not tried it. An old pub, there's quite a young vibe, in its one single bar, but it's a real mixed crowd and in spite of its city centre location, there's a smattering of locals. I got chatting to one chap - a Mathematician - who has lived nearby for over twenty years. He frequents the K&Q precisely because of the staff . “They have a low turnover of staff here”, he told me. “It makes a difference to the ambience of the pub.” And he’s right.  It does.

They have a function room upstairs too and not only is there a regular folk club, but one of the best spoken word events in town - ‘In Yer Ear’ happens monthly. Ish. It's run by Covent Garden resident and Soho regular, Dave The Hat, a good and true man with ties to Julia Bell, erstwhile writer and head of Birkbeck’s acclaimed Creative Writing course. Even though I consider them friends and I’ve had them both on my radio show (you can hear them on our Podcast page) they are both soooooo cool, they almost frighten me.

The K&Q is also the place where non other than Bob Dylan performed.  Yep, not only did he take his name from Dylan Thomas, another local, but it was Bob Dylan's first gig outside the good old US of A.  The story has it that in the days when the BBC could do such things, they hired him as an actor - to play the part of an American Folk Singer!  Apparently his acting wasn't too good, but while he was in the area, he thought he'd get his box and ‘monica out and play a few tunes at the local boozer.  His performance in the pub was much more successful than his performance on the telly, apparently.  No surprise there then!

It's worth a visit even if you don't want to write.  This area of Fitzrovia is slowly but surely being overwhelmed by new build flats for millionaires, and I fear for its future.  But the King has retained many of its original features and you wouldn't be surprised if Withnail walked in, resplendent in Trenchcoat and asked for the finest wines known to man.  The staff at the K&Q would, I’m sure, help him out. 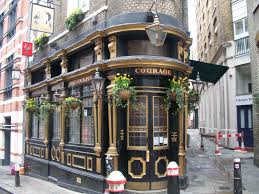 Step back in time and enjoy The Cockpit, a lovely old pub on the westerly side of the City near St. Paul's Cathedral. A pub has stood on this site, the junction of Ireland Yard and St Andrew's Hill, since the 16th century. The Cockpit takes its name from the fact that it used to be a major venue for gambling during cock fights, which was a bit unpleasant and stopped in 1849. The Cockpit is a small pub, with a high ceiling where you can still see a gallery which I presume was packed with gamblers when the fights did take place, although that may be a more modern artifice.

But the pub scores highly in the Shakespeare stakes.  I wrote a ‘Shakespeare Tavern Tour’ which we run on the bards birthday and we visit here.  Of the few London locations associated with the Bard, Ireland Yard is by far the best documented.  Now just a small alley, in Shakespeare's day it was the main entrance to Blackfriars Monastery. The monastery buildings were seized and sold off by King Henry Vlll during the dissolution, but they were mostly left intact.  The former gatehouse was purchased by Shakespeare in 1613 for the sum of £140.  That we know that to be a fact.  One of  few Shakespeare facts, in fact!  Although it was thought to have been bought in partnership with fellow actors to be used as a second theatre. The exact location of the gatehouse has been lost, the only remaining reference being Ireland Yard, but Shakespeare left this property - wherever it was - to his daughter, Susanna, and this is mentioned in Shakespeare's will. Quaff a mead to the Bard. 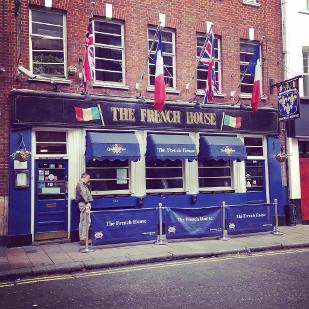 In an iconic area of London - Soho, there is really only one Big Beast of an iconic pub for writers and artists.  The French House.  It's been known as the French since the 1940’s even though it's name up until the fire at the York Minster in York in 1984 was... The York Minster.

There's a massive burden of creative history in what is really a very small pub in the middle of town.  And it wears it well, even at weekends.  Partly because non regulars expect to see or meet friendly bohemians in tweed and they come looking for us.  So it can be a very friendly place indeed.  (Er…  if you are wearing tweed, which I sometimes do because I got a cheap jacket off eBay!)

On the negative side, some don't get the French.  They only serve half-pints.  Except for 1st April each year, when they have Pint Day, in aid of charity - usually cancer research. Traditionally, Sugs, lead singer with the 80’s ska band Madness, pulls the first pint of the day. Until she passed away in 2018, his Mom was a regular too.

“They're a bit up themselves”, an occasional writer - and occasional French house visitor - told me.  “All this half-pint stuff and artworks on the walls.  It's all a bit of a pose.”

It's easy to see why this might be the case.  But, as a recent regular, I can tell you it really isn't.  For over a hundred years, this pub has been run by only two families.  Very unique in Big-Brewery-run-Britain The Berlemonts and the current family.  And yes, it gets packed and yes, it only serves half pints of beer and yes, it's one of the few pubs that sells champagne by the glass and yes, they have artwork on the wall and yes they don't like mobile phone conversations and yes they know that Charles De Gaul wrote his famous Second World War free French army speech there.

But.  And here's the thing.  The first time I tried to take 15 people from the London Literary Pub Crawl in there, they politely asked me not to do it again, “because we're so busy on a Saturday.  It makes it hard for our regulars.”  Few other pubs would say that to me bringing lovely, big spending, lovers of literature into their venue.

The following time I took a tour of six people outside, one of the bar staff bought out a bottle of wine and 7 glasses, free of charge.  Quality.

And even more so, if you turn up in the tiny bar more than a couple of times, the bar staff really do notice.  You don't have to be a big shot artist - although you realise they do go there.  I’ve bumped into a few actors and even a drunken ex-Dr Who on one occasion.  Beam me up!